Action packed Youth Keelboating Weekend On the Forth

“The consensus from everyone involved was that it had been a fantastic weekend and something we absolutely must do it again.” Reflected James Allan after pulling the weekend together for 11 teams of young sailors from across the country.

“It all started after an approach from Malcolm Stewart of A-Plan Marine Insurance who wanted to encourage some Scottish participation in the British Keelboat League.  The discussions with RYA Scotland crafted a generous offer of support to attract young people into keelboat racing and, with agreement of the British Keelboat League, a prize of direct entry into the BKL Championship Finals.”

In addition RYA Scotland looked to support clubs in developing keelboat sailing in their younger club members, developing teamwork principles, and providing an entirely different boating experience for sailors between 16 and 24.

Port Edgar Yacht Club hosted the event and the 707 Class Association provided event and support and boats alongside the essential logistical and volunteer support, that resulted in a weekend that included a day’s coaching and a day’s racing in a fleet of 707 keelboats.

Coaching kicked off early on Saturday and took 54 young people out into some pretty challenging conditions.  A series of follow the leader and up and down wind soon got everyone familiar with the boats and the need for teamwork.  Rapid fire practice starts for the afternoon gave the watching support boats great entertainment as the crew’s gained confidence on the line and things got closer and closer.  It was a long but very enjoyable day. 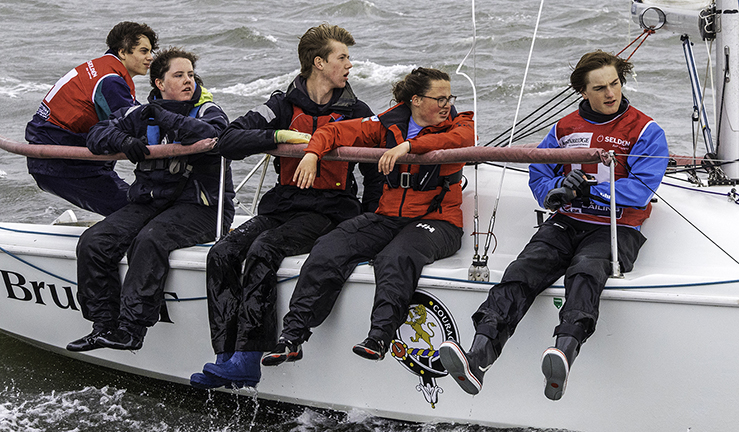 Sunday started pretty wet and blustery, perfect conditions to practice all the new skills and as expected the racing started close and remained that way all day.  Starts were all tight and positions changed in every race. From the ‘media’ boat we couldn’t call the results after 6 out of 12 races and stopped trying to guess who was leading.

Races were fast and close running for about 15 mins each with boat changes after every second race.  By the afternoon it was clear there were people beginning to feel the effort and mistakes were creeping in to all the crews.  With the wind shifting and easing and the tide turning, the Race team shuffled the course and strategies had to be amended for the final two races.

The day finished with only 7 points separating 2nd and 6th places but a solid win for Jake Miller, Anna Sturrock, Calum Bell, Laura Young and Sam Carr of Team Strathclyde on 51 points.

Calum Bell was trimming with Team Strath and commented on the experience. “I loved it, as did our team. It was a tough competition against so many talented sailors so we were delighted with the result. It was great to race the 707’s and the class reached out to the Universities to get involved, which was great.”

“Strathclyde University has a wide pool of sailors so we were able to bring a good team  together with experience across a range of boats. I am the current club dinghy captain, with a primary focus on team racing Fireflies, so we were used to tight, short and sharp racing where you are always setting up for the next mark and looking for small gains as a team. Well done to all involved and we’re looking forward to the finals in a few weeks time.”

Eilidh Miller, one of the team of officials who helped at the event noted. “It was so nice to watch the progress of teams learning new boats on a windy Saturday to the very close races on Sunday.
Good 12 races completed in varying conditions with very few rules infringements and every team getting a race win shows the competitiveness of the sailors.”

Thanking everyone at the prizegiving, James Allan CEO at RYA Scotland noted the fantastic support of the volunteers from Port Edgar Yacht Club and the 707 Class association along with the Race Team and the coaches without whom the weekend could never have happened.

Kevin Aitken from the RYA Scotland Board and representing prize sponsors Crewsaver, thanked everyone for taking part, the team who had put the event together and made a particular note of the fantastic prize from sponsors A-Plan Insurance which will see the Strathclyde University Team head down to the British Keelboat League Championship Finals at Royal Southern Yacht Club over the weekend 30th September to the 2nd October.

Scots already through to the BKL finals include Ali Morrish, Emily Robertson, Anna Dobson and Catherine Martin Jones sailing for RNCYC who Qualified through winning the Women’s Championship.