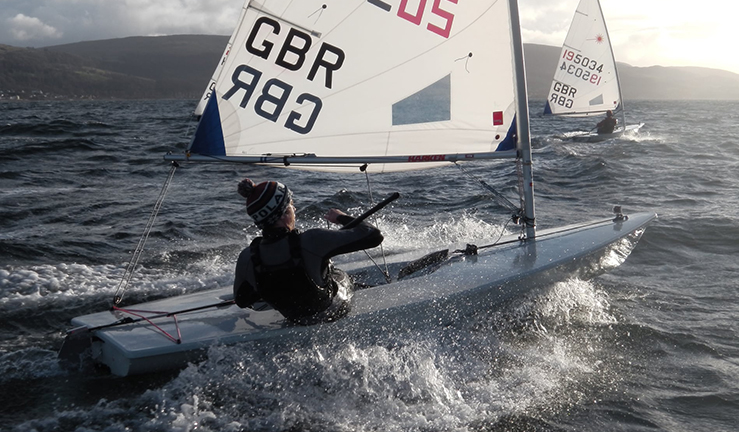 April is a busy start to the season for our sailors. We have three back-to-back events, RYA British youth Nationals – Plas Heli, ILCA Munster Championships -Baltimore & Irish Youth National – Ballyholme YC.
No sailors are taking part in all three, but this ensures there will be something for everyone. I would imagine the highest attendance will be next week at the Irish Youths.

For those who made the trip across the Irish Sea to our Celtic neighbour of Wales they were greeted by a very unstable and difficult forecast. After a postponement on day one due to high winds and a lumpy sea (that tested the resolve of some of the volunteers waiting on the water) the fleets finally got underway in a light breeze. The residual sea state made it tricky going for the one race achieved, but this seemed to suit the NI sailors ok with top ten scores being achieved in all three fleets.
Three races on Day 2 began to show the competitors form and proved constancy in the light and shifty breeze would be hard to achieve. In the Girls ILCA Fleet both Ellen Barbour, CAYC and Zoe Whitford, EABC began to trade places and kept the podium places in sight.
Tom Counter, EABC had an 8th in Race 3 to prove he had the speed necessary but a 35 and a 21 either side showed how important it would be to get a good start and sail smart.
Over on the 29er Course Erin McIlwaine, NYC and Lauren McDowell, RNIYC we off to a good start and maintained a good level of constancy with a 12, 5, 12.

The following days racing all had early starts with the Race Management keen to make up for races. The wind never really materialise and in the big fleet, light wind sailing, brainpower took over from any physical advantage. A trend began to develop among our sailors with every good result being followed up with something less appealing. With only two discards in the series it became less important to bank a top 3 but rather avoid the big scores.
Of note Zoe manage to pull of on the water, what would have been the top performance of any sailor with a 1,1,1,3 however, the scores on the board looked less favourable with a DNE in race one and a UFD in race two leaving a 1, 3 to count. This was a bitter pill to swallow but a good lesson none the less and I was pleased that it did not seem to cramp her still the following day as she resumed her form with some good scores.
In the final scoring of this Girls ILCA fleet it was Ellen Barour, also with a black flag and few mid fleet scores, who managed to secure a podium place finish with stellar performance on the last day.

Tom found some consistency in the teens and despite a number of top ten results throughout the week the big numbers took their toll to leave him 17th overall in the Boys fleet.
Our Skilful Skiff girls Erin and Lauren had a solid final day but again a big score to count in their series dropped them back to 2nd all female crew but the narrowest of margins. Although disappointed on the on paper result the pair sailed well and will be motivated for the following events the season at the Worlds and Europeans.
‘This week has been a fantastic event for all the sailors and our sailors have proved to be competitive. Despite this being a non-coached event, I was on the water and now have lots of learning to take away and feedback through future coaching’
‘It can be hard to watch the mistakes and feel for the sailors however it is through these errors that we learn and progress. I was pleased with how our guys conducted themselves both on and off the water. Looking forward to the Irish Youths Next week’ – Andrew Baker (Performance Manager)