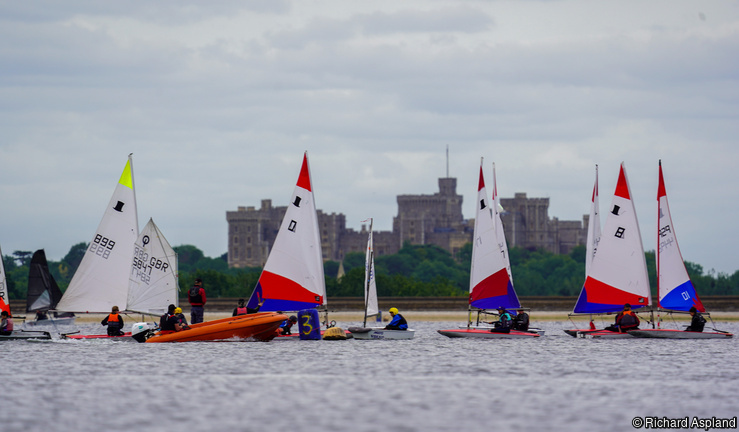 8 Scottish sailors made the journey with 5 making the making the gold fleet with others learning lots in the Silver and 4.2 fleet. Dalgety Bay’s Gavin and Bess Homer reported on the adventure.

We arrived early to get used to the conditions on the water before a cool down in the water. After most of the team had got through registration and measurement they met for a team briefing with ex Scottish Squad sailor Lorenzo Chiavani, now based at Riva del Garda.

Lorenzo gave a brilliant briefing on the breeze at Garda and various things to look out for. The 5.3 sailors then headed out to the race area which got some parents ashore were worried about as they were 2 to 3 miles upwind which meant when the sailors came ashore they had huge grins on their faces as that meant they had a 3 mile run home in the full ‘ora’ breeze!

Sailors launched at 1200 to find the breeze had already filled in which meant it was a long beat out before 3 races in the solid breeze and them heading after a full on day on the water and enjoying the “experience of recovering to the Riva slip”.

On Tuesday the wind shifted 180 degrees as the leaders of the 2nd flight finished, but the jury decided it has quick enough that the race was fair and the race allowed to stand. After a wait to allow the wind to settle race 5 for yellow flight, the only one to be general recalled in the sequence. Following the restart for yellow and allowing the 4.2s to restart they abandoned race 4 as blue flight started and headed off upwind.

This was where fun and games began with the weather. The wind shifted 40 degrees on the blue course as the predicted thunderstorms impacted the breeze. As the blue flight sailors waited around the 4.2s headed in and then the thunder was heard . Blue flight was finished for the day while yellow flight finished race 5.

The call went out that coaches were allowed to tow there sailors home as the wind died until a mile off the club a force 6 squall came down the biggest cliff before the wind died off again but the thunderstorm stayed in the surrounding valley.

By Wednesday the blue flight was a race behind it was an early start for them in the morning pele breeze , before the 7 sailors being supported were towed in for an early lunch . All sailors then headed out at 12 for the final qualification race for the 5.3 fleet and raced 5 to 8 of the 4.2s. With the ora in all fleets managed 3 races and at the end of qualifying top Scot was Ruari Herrington in 10th followed closely by Ben Homer in 11th. Thursday

With qualifying finished racing was back to normal and competitors started in slightly lighter winds with Ben winning race one and both Ben and Ruairi making big moves up the leaderboard to 3rd and 5 the overall at the end of the penultimate day.

If you are looking to cool down after the summer sailing then the RYA Scotland Class Academy dates are now live here.